Puglia: the bridge between East and West 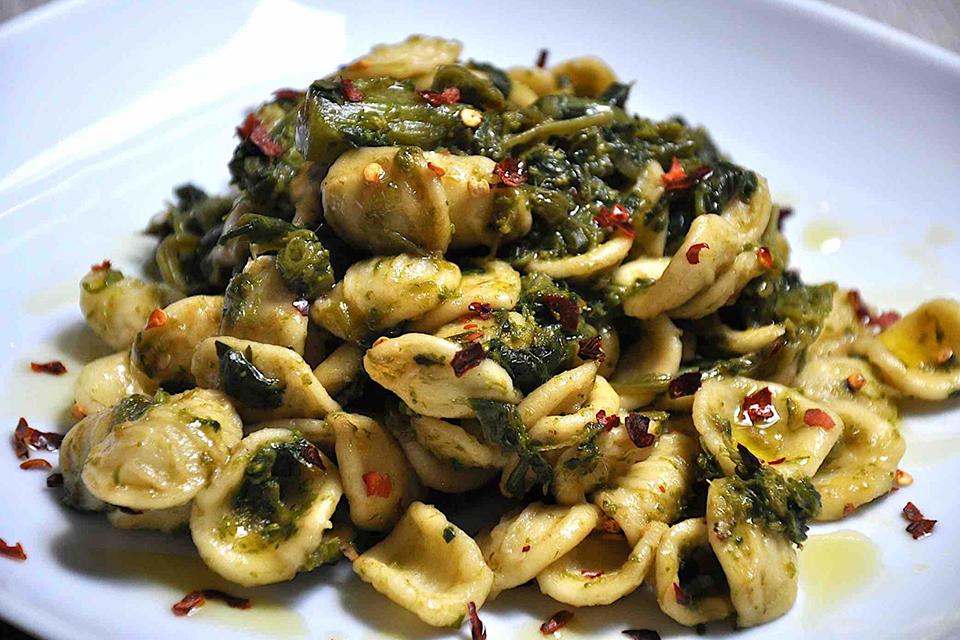 Puglia: the bridge between East and West

In our last workshop, our lovely group has "visited" the beautiful land of Puglia , a charming southern region which features some of the most ancient examples of civilization in Europe. Would you believe that Puglia is a land even rich with Dolmen and Menhir(smoothed stones, horizontal and vertical, typical of religious architecture during the Bronze Age, generally associated with North of Europe)? It is also a territory that hosted many earliest Italic tribes (like the Peucetian, the Daunian, the Messapian) and welcomed ancient colonials, from the Greeks, the Phoenicians to the tribes of nowadays Croatia. If I should appear Puglia to something, it would be a bridge, a long one which connected many cultures, from the East to the West. And, like in Sicily, this incredible achievement, this intense human journey, is notable in the humble and yet rich " Apulian cuisine ".

I need to thank an unknown travel companion who, almost thirty years ago, has given me the best introduction to Puglia and its gorgeous heritage. When I was 18 years old, I had the chance to visit Puglia, my very first time. Nine of us, all friends, on a bus, leaving from Napoli Train Station with an ultimate goal: The Gragano peninsula , with its gorgeous beaches and crystallin sea! Once on the coach, I sat next to a kind, funny looking gentleman, perhaps around his mid-fifties. His name was Nicola (first name very representative in a land where the cult of St. Nicholas is truly strong!), Originally from Cerignola , in the Foggia area . He was now living in Naples, but returned to his land as often as possible.

Nicola explained to me that Puglia consisted of beauty, simplicity and creativity. "We are humble and inventive people. For my family, everything has to do with the fields, everything. We transformed a limestone land poor in fresh waters, in a garden "and I would discover their flowers were the wild chicory and the turnip greens. And more, I understood how significant were the immense olive trees, which provided shades during the summer and were the essential oil of this land, an enormous engine surrounded by 500 miles of coastline.

This is why I am so in love with Puglia and to get knowing their cuisine, the reader needs to understand the existing connection between the inhabitants and their lowlands - broken here and there by their white villages, so shiny, almost in flame, at the touch of a strong, warm daylight - with their blue sky and the need to use fresh water wisely.

I want to introduce you to some typical dishes (two), the ones charmed visitors meet by the many " masserie " along the never ending "esplanade" of the Tavoliere .

The first is Orecchiette with Turnip greens (with green turnip).

If you have participated to our workshops, you have learned that "pasta" existed since the ancient Greek times. Of course, it was different somehow from our modern one, but overall, we can say that pasta was well known in the Mediterranean. In fact, the Latin poet Varro wrote about some type of "pasta" made in a shape of a small disk, called "lixulae" .

Other historians, link the "orecchiette" (literally meaning small ears) to the Angevin period , around 1300 CE, while others, associates the pasta to one of the largest Ashkenazi Jewish community in the peninsula (from the famous Haman's Ears during the Festival of Purim ).

Pick one! So many contenders! What is important is that you cook the cime di rapa in the same water of the "recchjetedde" , as the writer Giambattista Del Tufo called them, in a document dated around 1500 CE (it was a weeding deed and as contract between families, it was reported that "very important, my daughter has the skill and knowledge to prepare the" recchjetedde " ...).

The recipe is very simple (maybe this is a good time to adventure in some homemade pasta!): Water, semolina flour and a pinch of salt. That's it. Once the dough has rested, it produces a long, thick tread of pasta and start to cut it half of an inch. After that, you will shape, small dish like, the pieces, using your thumb on pastry board (a wooden pastry board) hollowing the fresh pasta dough just like… a small ear! After produced the desired quantity, let them dry. Now, you are ready to cook the pasta (along with the green turnips, don't forget!).

Simple, right? One variant is adding anchovies to it. Whatever gives you a kick!

Also, this kind of pasta is great with salsa Ragù (gravy with meat base) and ricotta salata cheese. So many choices!

Are you already full ?? Come one, find some space! You need to try the following one!

My second choice from Puglia would be pasta Ciceri e Tria !

If the orecchiette may have an uncertain origin (ancient Greek? Medieval French? Jewish? Etc.), this pasta has a for sure link to ancient Rome !

Ciceri e Tria is a typical, March pasta dish, down in Salento (the bottom of Puglia region). In fact, it is the pasta for the San Giuseppe festival , March 19 (also Father's Day in Italy ).

One thing is for sure, this dish was already famous on ancient Roman soil. Ciceri is a word coming from Latin ( cicer, ciceris ) meaning chickpeas (also, the family name of the most famous lawyer and stateman of all time, Marcus Tullius Cicero !!).

The ancient "pubs" ( Taberna ) usually served them as warm dish, along with Lagane (a pasta similar to our modern tagliatelle ). Even the poet Horatius , wrote about this dish in one of his famous "Satirae" .

After the collapse of the Roman empire, we will need to wait for the Arabic influence in the Salento area. The Arabic truly appreciated the pasta. So much that the Latin name of Ciceri et Lagane was forgotten and the new Ciceri ed Itria became the most familiar one. Itria , is the Latinized word for the Arabic "fried pasta", and perhaps the origin for name of the famous Valley of Itria (near Alberobello , where the Trulli are).

What makes it so special, is the cooking process of the pasta, for it is partially fried and partially boiled and both used as base for chickpeas (which will be prepared with the addition of extra virgin oil - Olio Evo, the higher category, onions , garlic and few other spices - my favorite, red pepper but you are good with the black pepper).

The pasta dough for the Tria requires the usual semolina flour, some water (less than half-cup, depending on required quantity), pinch of salt and olive oil (depending on quantity of pasta, but generally two spoons).

Once prepared the dough, you will work it in order to obtain a long pasta sheet (like a lasagna). Then, you will cut the sheet in rectangular pieces of 1 x 4 inches, twist them slightly and let them dry.   You will fry 1/3 of the pasta (regular oil, not extra virgin) and the rest you will boil in the same water (or what is left added to regular, fresh water) where the chickpeas have been previously cooked (basically a broth if you follow my suggestion about adding celery, garlic and two regular peeled tomatoes   while cooking chickpeas).

Once you have pasta and chickpeas cooked, you are ready for this marriage of flavors. In a separate frypan, add some oil and garlic and when oil is warm enough (and garlic becomes golden color), add the pepperoncino and some onions. When you feel the sizzling coming up, combine part of the chickpeas. The result will be amazing!

You are now ready to "season" your pastas - fried and boiled - with this amazing "dressing".