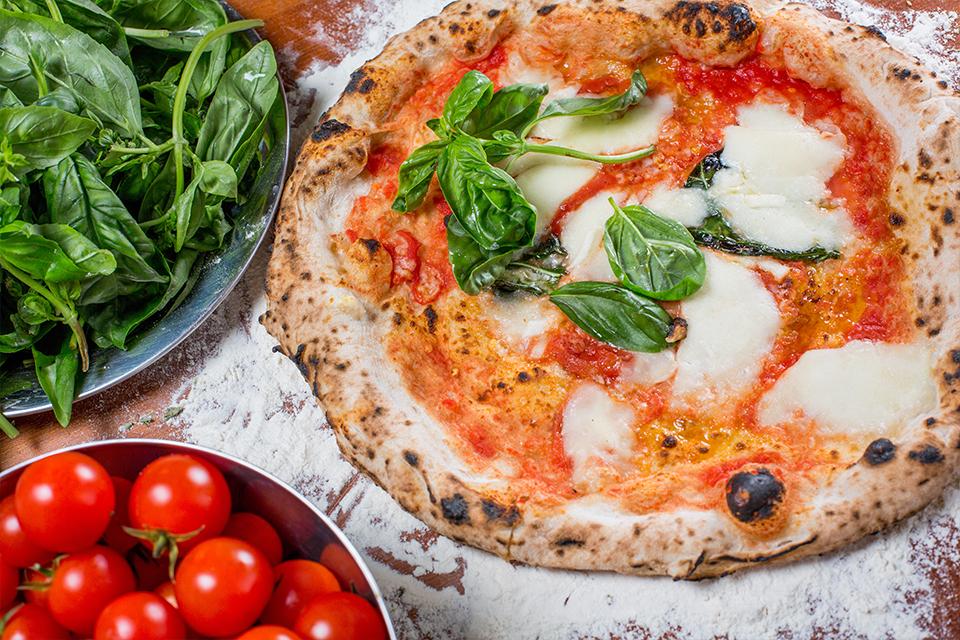 La Pizza: an institution from Naples to the Amalfi Coast

The first thing you learn, as an Italian, is that food it is part of our culture. It's in our blood, in our early family memories. I am sure that, since mankind tamed fire and its properties, food became not only a necessity but an art! What the mind creates for necessity, the heart and creativity sublimates! Because we are approaching our workshop on Naples and Amalfi Coast, what better than starting Antonio's Cucina with the world happiest food: pizza .

No one can really be sure about the origin of the most famous circle-shaped delicacy. However, the traces of its otigin go down to the ancient Roman times! Even the poet Virgil, in his Aeneid , has the main character (Aeneas) eating a pinsa , a stretched, oval shaped flat bread, once the Trojan prince reached the shores of Latium (the region where the future city of Rome will be founded) .

Then, for centuries, that particular flatbread disappeared, at least from the "main news" until 1889 , when in the city of Naples, baker / chef Raffaele Esposito supposedly "invented" the Margherita (named after the Queen Margherita di Savoia ), the most famous pizza worldwide, based on three simple toppings: tomato sauce, mozzarella and basil .

Allegedly, because it seems that the name was only a "PR" stunt, a fluke or a homage to the Savoy family, rulers of Italy. After all, the tale about the colors of the pizza, recalling the flag of the new Kingdom of Italy, seemed uncanny: green (basil), red (tomato sauce) and white (mozzarella).

One thing we know for sure, pizza, a new variant of the ancient pinsa , was alive and well in that particular area of ​​the Gulf of Naples. In the 1500s the Spanish brought to Europe a curious, rounded fruit called tomato ( pommodoro ). The cooked sauce of this south American fruit became the main topping for the pizza. The curios shaped, flat bread soon turned out to be a common, daily food, particularly famous among the lower class, probably due to its richness which made it ideal for people who could eat only once a day!

Interestingly, we do have records in late  18th century of it and according to those sources, the original Neapolitan pizza was what we call the "Marinara" (the "Sailors' one") and only later we have the "Fior di Margherita" (shaped like a daisy, for the arrangement of slices of precious mozzarella). Furthermore, the famous Alexander Dumas , once wrote in 1835: "... (In Naples) ... Pizza ... it looks like a flat bread we do in Saint Denis..it seems a simple dish, at first. However , it results more complicated..a small pizza can satisfy a single man..a big one an entire family " .

Therefore, modern pizza was diffused even earlier than 1889! Case closed, your honor!

Though, why is the Marinara called like that? It was assumed that the origin came perhaps from the presence of anchovies, as part of the topping but, according to " Michele a Forcella" (one of the most famous pizzeria in Naples, serving all days only two kind of pizzas ... guess which ones ??) the historical "Marinara", had only tomato sauce and some shaved garlic, as topping.

Apparently, Neapolitan fishermen coming back after a rough night out at sea, were the very first customers for bakers close to the city harbor. Fishermen at that time definitely could not (always) afford the cheese on top of the pizza. Therefore, the "Marinara" was indeed a more affordable version of a " Fior di Margherita "!

What a rich and streaked history, isn't it? What I found extraordinary is that a very simple, basic recipe survived the centuries, if not the millennia, and yet it was capable of evolving (the tomato became a MUST!) And has become the number one favorite street food ... worldwide! Nowadays, we are used, to the many variants, dough and styles of the Neapolitan pizza. Even in ... Amalfi Coast ! I know, I know, it sounds odd, but it is true.

In 1920 Luigi Dell'Amura ("Gigino") , a baker in Vico Equense , created a particular kind of pizza which could be cooked only in larger oven and it measured not less than a meter in length and 30 cm in width, exclusively served on trays on trolleys! The famous " Pizza a Metro " can be of two different types, like half "Margherita" and half "White with Ham and Mushrooms".

Now that you have read about it, it's time to try! Nada's Italy invites you to visit Napoli and Amalfi Costiera , to experience the real pizza… like a pro! What toppings will you ask for your meter long one? We are curious !!