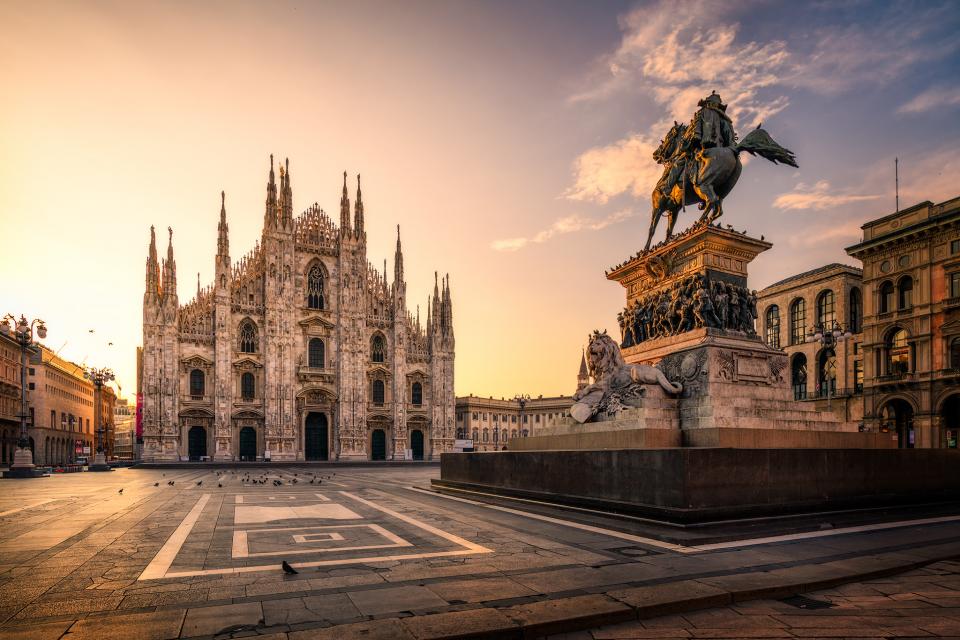 Amidst wonderful monuments, baroque fountains, Italian ruins and old churches, the piazzas of Italy are certainly the best way to get to know the life and history of the city. Every Italian piazza has several commonalities: their civic and symbolic importance, they’re the physical center of the community and also being the main outdoor theater. The piazza is the home to the most important political buildings, the main cathedral, cafes, restaurants, and sometimes monuments or fountains. There’s no better place to people-watch in Italy than in a piazza. Among the countless iconic piazzas throughout Italy, we have chosen the Top 10 Most Iconic Piazzas.

A stunning cathedral square that is equally renowned the world over is the Piazza del Duomo of the city of Milan. It is known mainly for being home to the Milan Cathedral, the fifth largest cathedral in the world. The Gothic-style church took almost six centuries to build, with the first stone laid in 1386 and the last gate inaugurated only in 1965. Other important buildings found around the piazza include the Palazzo Reale di Milano (the royal palace), which is now an important cultural center, and the Galleria Vittorio Emanuele, which was completed in 1877 and is today one of the oldest shopping malls in the world.

Although the piazza’s current look largely dates back to 1860, the open space itself has been around since 1330, when the lord of Milan, Azzone Visconti, ordered the creation of a market square which first became known as the Piazza dell’Arengo. The square was redesigned several times over the centuries. In 1860, the city government launched a competition for the redesigning of the piazza in celebration of the unification of Italy into a single kingdom — a contest won by architect Giuseppe Mengoni.

There are just so many piazzas in Rome that it is hard not to include this magical destination on the list. The Piazza Navona is arguably the most beautiful city square in Rome and one of the most important in terms of history and heritage. The piazza is known for its classic architectural treasures designed in the Baroque Roman tradition. These include the Palazzo Pamphilj and the Church of Sant’Agnese in Agone, both of which were built in the 17th century. It is also home to the famous Fontana dei Quattro Fiumi or Fountain of Four Rivers. Built-in 1651, it represents four rivers in four continents, namely Africa’s Nile River, Europe’s Danube, Asia’s River Ganges, and the Americas’ Río de la Plata.

The present site of the piazza sits over the interior arena of the ancient Stadium of Domitian, commissioned in 80 BCE by Emperor Domitian for the staging of agones or games. This is why the piazza still follows the stadium’s shape, while the stadium’s original lower arcades are actually integrated into parts of the buildings that now surround the square.

Napoleon is said to have called St. Mark’s Square “the finest drawing room in Europe.” Saint Mark’s Square itself is grand and beautiful but nestled between the Doge’s Palace and Biblioteca Marciana lies this pretty little square. It has views out to the lagoon and enormous pillars topped with statues of the symbols of Venice: the lion and Saint Teodora of Amasea.

The piazza, having more than a 1,200-year-old history alone makes it one of the most culturally and historically significant sites in Italy. Furthermore, the landmarks surrounding it — the 900-year-old Italo-Byzantine St. Mark’s Basilica and its prominent campanile (bell tower), the Grand Canal, the Palazzo Ducale, plus the entire ancient city of Venice itself and its famous lagoon makes visiting Piazza San Marco all the more special.

Originally, only the four-thousand-year-old Egyptian obelisk erected in 1568 and a Carlo Maderno fountain built-in 1613 were the prominent features of the open space in front of St. Peter’s Basilica. Between the years 1656 to 1667, however, Pope Alexander VII commissioned architect Gian Lorenzo Bernini to redesign the space and turn it into the modern piazza we know at present. Today, gigantic Doric-style colonnades surround the square, achieving Bernini’s purpose of creating a space meant to make visitors feel they are being welcomed into the open arms of Christendom.